Swedish dinner tonight. Courtesy of Ikea. I made caviar toast and salmon dinner. Oliver were very happy with his lady.

Otherwise nothing much. People outside on the streets and Im getting a cup of tea.

The toasts. They were good.

Got a cocosa order (you will see my sexy shoes tomorrow). Among other things i bought a set of la perla underwear. I got the bra and a Filippa K shirt. For men. Poor guy who got my underwear instead.

Loving my new chair in the background

Its something about Ikea. It swallows time. After spending 5 hours there yesterday doing nothing my theory that it time warps held. We did eat meatballs though, with mash as it should be. And bought fläderblomssaft, knäckebröd and löjrom.

Oliver and me found most of the things we want to have and felt confident our flat will turn out to be a slightly mental looking heaven.

This is one of our favourites but we have nowhere to put it.

Im thinking, why not have a moose in the dungeon. We havent agreed on that one yet.

We did found my reading chair though, in the bargain corner. Win. (dont mind that its slightly wonky looking, that was Ol putting the legs on wrong when we came home. Its actually perfect looking) 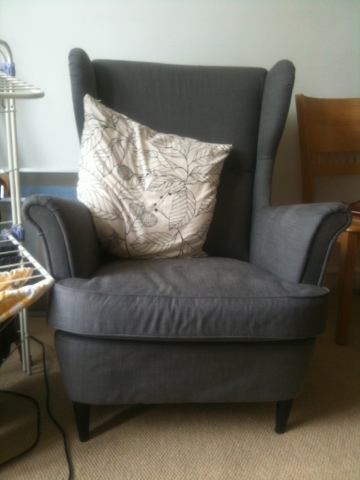 Went to Ikea on a recon mission for the new flat. We test sat sofas, looked at chair, ate meatballs and bought tangerine candles. You have to leave with candles after being at Ikea

Best buy was the chair i wanted almost half price from the bargain corner. Hallelujah! I will have my little reading spot  in the bedroom.

Tomlins, these ones are for you…

Good weekend. On Friday Ol and me got confirmation on the flat so we celebrated by watching GoT in bed and I drank a beer. Rock and roll!

Saturday I went out to Kix for lunch with the Troxes and Laxen who are in London at the moment. Swedish summer lunch with a side of pizza for hang over Kix.

In the evening it started pooring down and we took shelter at H-jamal’s where he and Malin treated us to a shrimp decandence. Shit load of shrimps. It was also drinks. That ended in boy band singing on the chairs and snogging a stuffed fox. As you do.

Sunday I felt a bit fragile but headed out to soutbank to meet the Troxes and the Salmon again. We saw the wonders of candy land, danced at a turkish festival, ate ice cream and fought our way through throngs of tourists. Then Ol decided that we take the ‘long walk home’. That took 3 hours. we had already walked for 2. about 2 hours in i wanted to punch him. Then i stopped feeling my legs and went into a dull murderous rage. After 3 hours of walking I finally got to eat and all was dandy again.

Hang over Kix making lunch. You cant see the pizza but it was there

All the shrimps eaten and going for the drinks.

Malin trying to stay out of the golf conversation.

H-jamal in charge of the music. We listened to Westlife. Not so gangsta

Its a lot of passion for that backstreet boys song.

Ol didnt participate in the singing but he was quite happy anyweay.

and dancing sitting down. Basically dancing wherever we could.

He looks about as in to it as I do.

We went to the turkish festival and ate kebabs

Ziggy was sorely dissapointed he didnt get to eat all the food that had dropped on the ground.

‘How can they give me a kebab without sauce? I have been rinced’. He did seem to manage to eat it anyway.

We werent the only one enjoying some turkish dance band music.

Ol got to drin k his fermented yoghurt drink.

We looked at books.

and went to candy wonderland

I was kind of keen on going up in this one but my delicate state took the decision for me.

There were street performers everywhere.

London showed itself from its best side.

I cant stop planning. In my head I already see what our bedroom will look like

This is exactly what our room will look like when Im done with it.

Yesterday Ol and me ventured East for dinner with the Tomlins and to see there new flat. It was so pretty. A perfect little black and white heaven by the canal. We drank gin and tonics and ate burgers. Perfect in other words.

The view from their window, they are on the 5th floor. Oliver loved it and kept running around taking photos.

Tommy found his place by the window. It was a beautiful light in the flat.

He showed his tattoos and made Elin worried about his talk about the sleeve his getting on his other arm as well. I like the tattoo bearded look.

Home made burgers on a 3 year old disposable grill.

The night time view from the balcony. We had such a nice time talking about the summer and drinking big cups of mint tea.

Now the planning will begin (or begin? I have already decorated it in my head).

and a soft reading lamp.

We will have Mirandas hand painted table

with her pretty vases on.

We will have a mix of Ols grandfathers stuff, my paintings from Sweden, prints and things we love. And, not to forget, my work – the banana painting.

But more than anything, we will make it our home.

Not only did I buy the trousers today I also bought these:

I think its because Im so nervous about the flat. Also that Im bored. I also eat crazy amount of sweeties at work all the time. Please save me from myself!

Found these lovely trousers on asos for £10. They will suit the new flat beautifully (crossing fingers we get it now). Otherwise they will amazing country house trousers. When not running around in the forest. They are so not forest trousers.

I also fell in love with this one but cant see any use for it. At all. Damn. Sanna, maybe something for you? I can totally see you rocking it.

London is hot. People are sweating on the tube and the city is melting. I love it. Drink ice cold elderflower cordial and hike around the city trying to find the perfect flat.

We are hoping for this one

Its the dungeon one. Landlord is overseas so we are waiting for the answer. I think we would be happy there. Or, I know we would.

We are going to Tomlin’s for dinner tonight. Up in East by the canal. It will be so nice to see them and catch up. I think I’ll have a beer. Knowing Tommy he will probably have one too.

Its light in our dream flat. Light and fake wooden floors. Better than carpet. I can see flowers in the fire place.

In that little corner I see myself in the rocking chair. And look at all that storage. I can buy even more clothes.

The dungeon. Oliver will be working down here. I will let him come up once in a while. Not too often though.