In my quest to recover what little energy lurking in my body I went straight home from work yesterday picking up the hell hound on the way. You might think that meant chillaxing doing nothing but with two bridesmaids duties coming up im keeping busy. At the moment looking through Asos for bridesmaid dress. 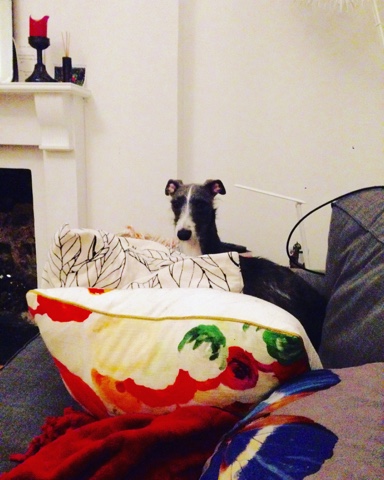 W was NOT happy with me for some reason and huffing threw all of the pillows between us sitting down on the other side of his sofa fort staring angrily at me. When he realised nothing was coming from that little sulk he crept over all the pillows and put his head in my lap. And there we sat watching Vampire Diaries and living it up on whats app.

It’ll probably be a copy paste on that tonight. This could be a new me if I didnt have every night next week booked. Hands up for Easter!!

Spoke to both Albin and Dave last night and the first is leaving London on tuesday and Dave is off at the beginning of May. Not sure what it means when the guys you’ve ‘dated’ (big word) both feels the need to flee the country…kidding, i know it has nothing whatsoever to do with me. Im friends with both and they are awesome guys.

Dave just got himself the biggest tattoo which upped his bad boy factor with like 150%. Which, in his own words, was ‘already as high as it could be’ (without giving too much away is sooo true. He is an absolute sweetheart but he probably ticks every movie bad boy box out there.)

I’ll miss them both. They made the whole ‘breaking my arm, sitting on the sofa, start dating’ thing the best possible. If you are to put yourself out there again do it with the sweetest boys that will show up on your bday 4 months later giving you amazing, thoughtful gifts and when you end it decide that they still want to keep you.