Found the perfect hat! I have been looking for this beauty for a while. One that makes you look like a mix between a 70’s boho chic and a witch.

I walked into & other stories and there it was. I fell instantly in love. Apparently this wasnt shared by everyone since this odd little man came up with another hat when I was trying it on and pantomimed it suited me better.

Oh well, odd little men cant always be right so I went for my dual colour master piece instead. 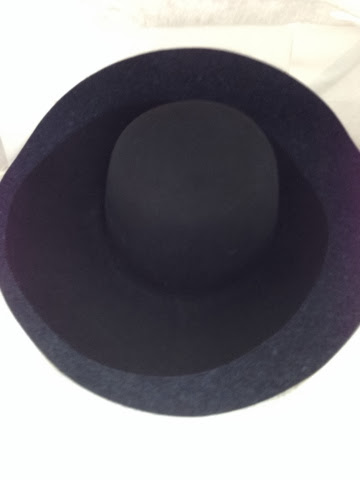 I have a cunning plan for this years Halloween. When all the naughty kids come trick and treating I will give them the weird candy that ol came with from the chinese shop. They will eat the salty plum, brain one, tell their friends and then never come back. 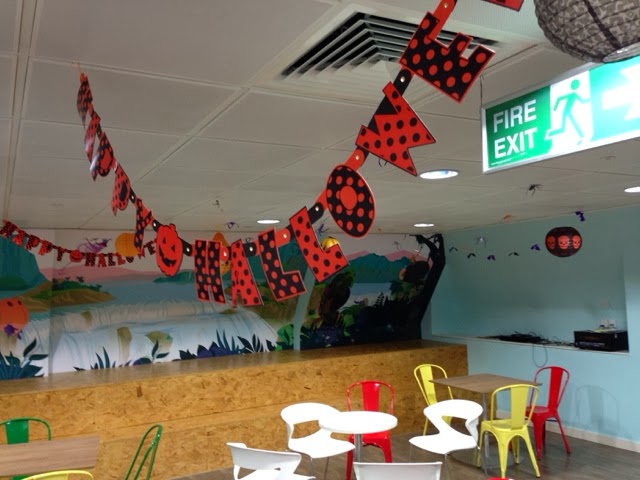 Even our office is Halloweened up. Very relaxing to sit and eat in. I absolutely adore it and wish it looked like this always.

Found myself a new pedometer app. That was the rage 3 years ago, how many steps do you walk a day, and Ive decided to get all into that again. I walk like a crazy here in London.

Kix thinks my hips will fall apart but we must be made for this, at least its better than just sitting all day and then go home on the tube. And since Im way too lazy for the gym at the moment this aint too bad. 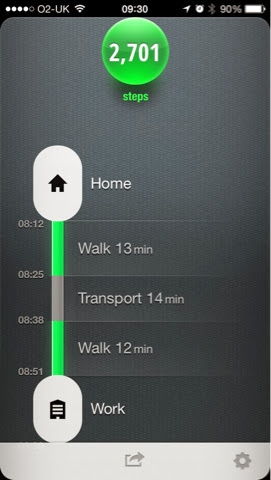 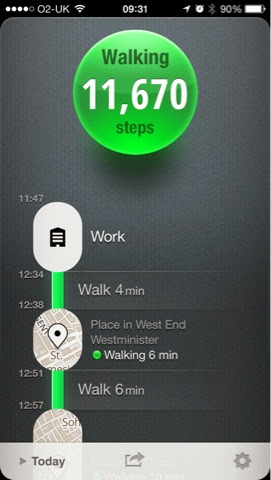 Yesterday I did over 10,000 steps walking home from work. I feel like a walking ninja. Its finally gotten properly chilly here and it was a cozy, dark walk home through London. There is something magical about the darkness of autumn.

And yeah, Ol finally made those bangers and mash. Very tasty.

Oliver came home with some weird ass candy yesterday. Chinese stuff. As a notorious candy eater I applaud his efforts but im not fully convinced yet. 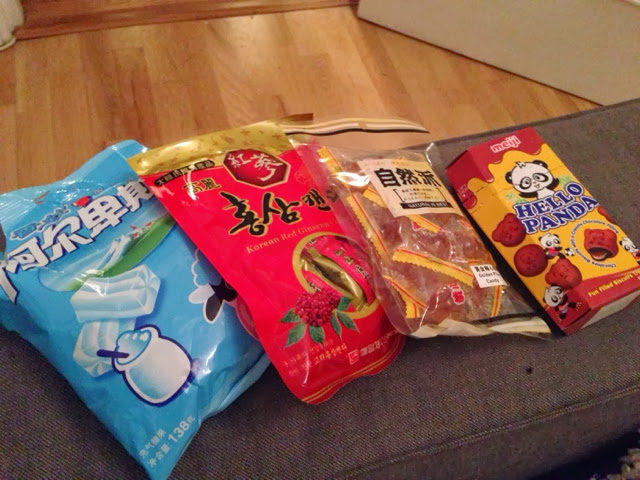 A selection of ginseng candy, plum candy, youghurt candy and some chocolate biscuits. 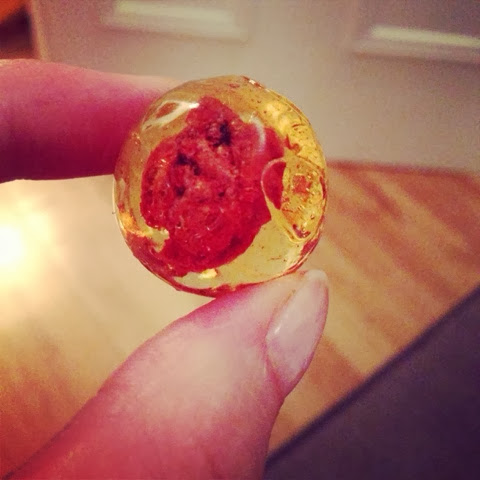 I tried the plum candy. That weird thing that looks like a brain in the middle is actually salty. Im not so sure. It wasn’t bad, it was just really, really weird. And looked like a brain. I ate it of course.

My hair is really long now. So long that my mum looks at me with barely hidden disapproval and says ‘you hair is very long’. (in my mums world you hair should reflect your age. Im clearly way to old for almost mid riff length hair.)

Sun is out. Im about to buy lunch. Exciting stuff. Tonight Ol will give it another try with the bangers and mash. He bought me kebab yesterday. That is like an Elin dinner. 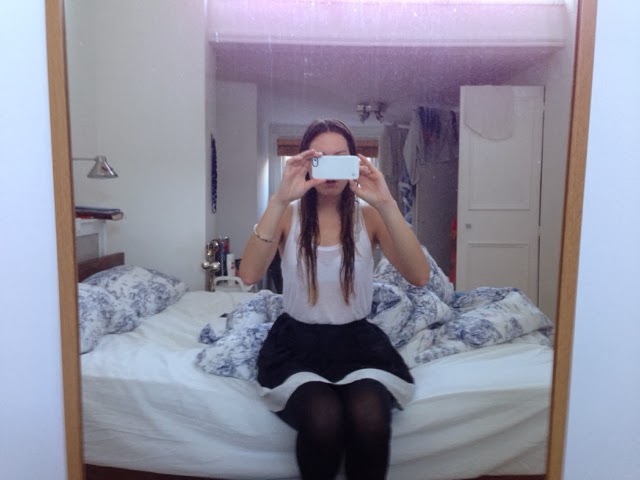 Yes, it is a very unmade bed in the background. Its early morning ok, dont judge me.

Its been a full on, high speed, wam bam day today and my head feels like mashed potato. How fitting that is what Ol is cooking me tonight. Bangers and mash.

Im also fighting my tired, Monday blues feeling that I need to walk home today. If I dont I might blow up and look like a balloon (yup, that makes absolute sense). I walked to work today. 7k. ‘Brain listen, you are fine, you’ve done your shit today.’

This is my biggest problem after a fun weekend, to manage my brain fail when my tiny lizard brain starts shouting ‘you need to walk you fat, lazy oaf’. So, I’ve promised Ol to take the train home and sit on the sofa.

I also listen to Maritza Horn to feel happy in comparison. At least i dont need to starve and sing my kids to death since I cant feed them.

Monday morning. London is in the middle of the big storm. According to Kix cars are supposed to fly around. Well, at least the parks were closed this morning and the trains were late. Otherwise there was a brisk breeze and that is about it. I survived people.

Good for you since that means I can tell you about my thrilling and awesome weekend. Hold your horses. 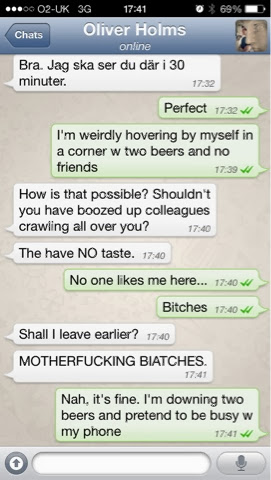 Friday started with work drinks. I knew no one. I stood by myself in a corner and downed 2 beers in 15 min before I told Ol to come and save me.

He took me to an awesome pizza place. As in maybe the best one in London.

We headed East for some magazine launch. It was us and every youngster in the fashion industry. I felt old. Drank a couple of more beers and then headed home. 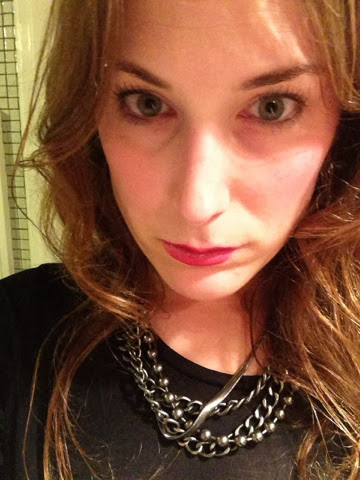 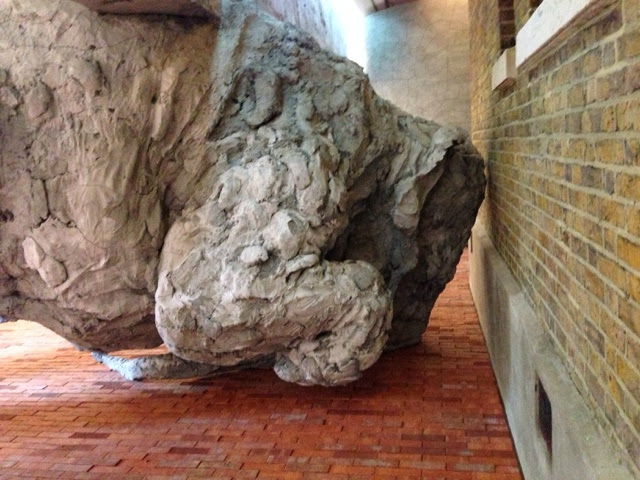 Saturday we went to the newly opened Serpentine Gallery wing and saw a concrete Elephant. 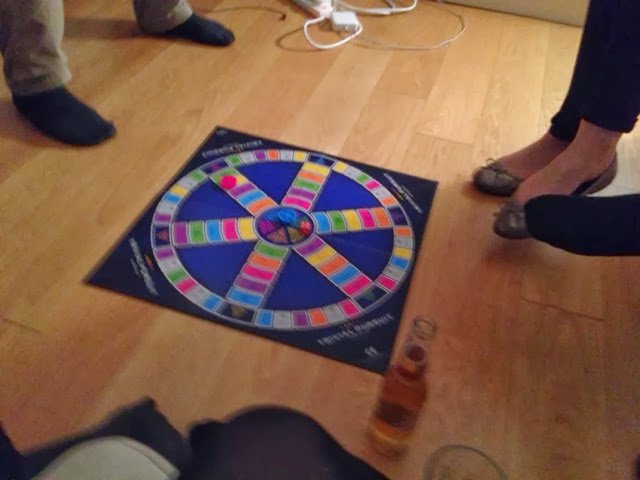 Eventually we tired of the concrete stuff (well, I tired, Ol could have stayed there all night) and went to Anna’s for some TP. 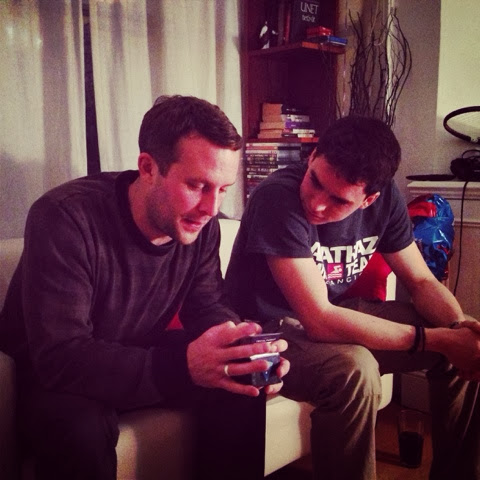 Boys vs girls. Not cool when the only 3 british people were on the same team and one of them happened to be sober. 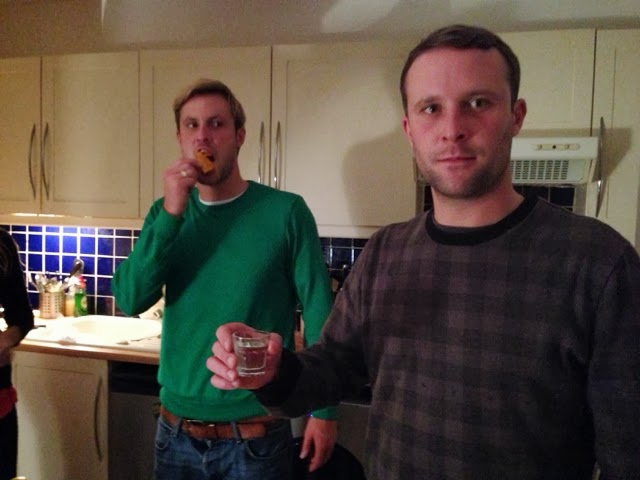 Every time one team got 2 pieces we had to drink sambucca shots (or eat as in Danny’s case). That didnt help the overall genius of the group. 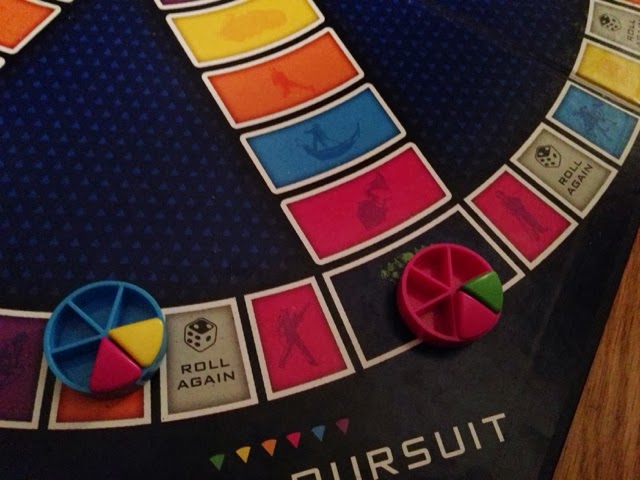 At one point we were head to head though. Then the boys crushed us. You really do get more stupid when you drink. 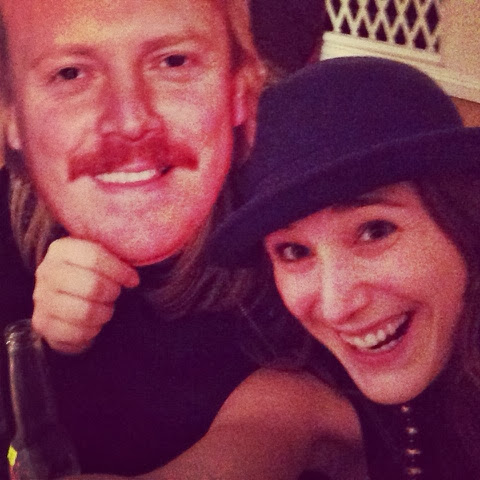 Anna and me were more focused on having fun. 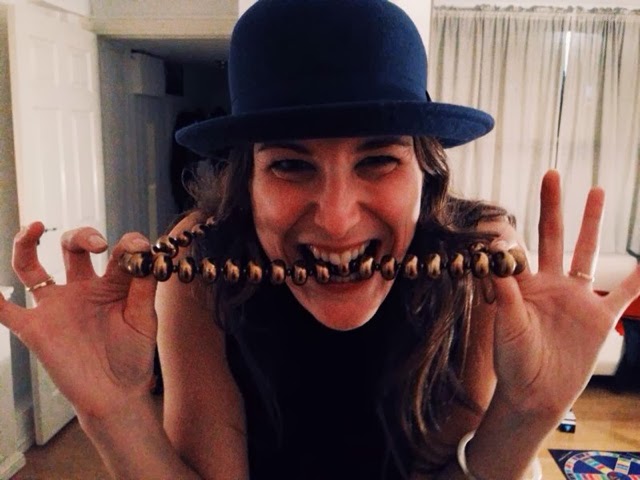 Or dance around in the living room. Yesterday we took a long walk along the river, went up to the japanese for dinner,started watching Breaking Bad and ate potato wedges. Not too shabby.

Yesterday not much. Made potato and leek soup and watched netflix on my phone while Oliver watched some old movie. The modern couple.

Today so far have been proposed the Medeltidsveckan at Gotland from Sanna. Finally! I have dreamed of this all my life and due to GoT people are starting to realize how great the idea of dwarfes, knights and long dresses are.

Later I will eat pizza and go to some launch party of a new magazine. Oliver doing to heavy lifting with the soup. 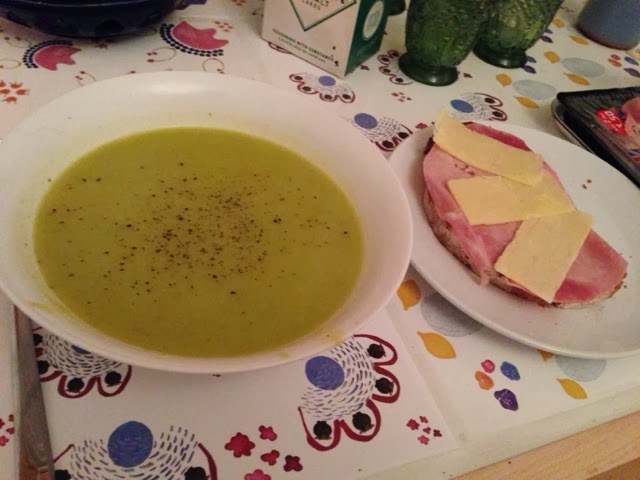 Pretty good. We now have soup to last us a life time. Good when you are being cheap and cheerful. 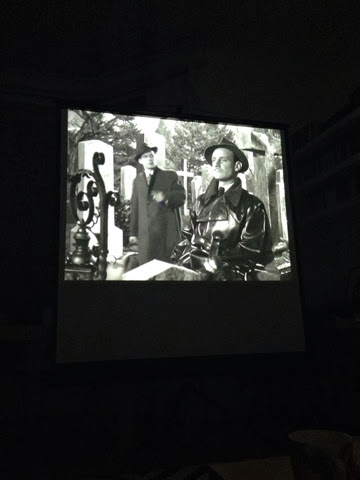 Beautiful out when I walked home last night. The sky was on fire. I contemplated Halloween costume, how long the perfect walk home from work is (closer to 40 min, not 1h15 as in my case), what Sanna and me will do when she is in London (have a vision of her and me hanging with the deers in Richmond Park and shopping ridiculous shoes as well as eating macaroons while pretending to be rich housewives) and if its normal to eat 1.5kg of Djungelvral in 2 weeks. 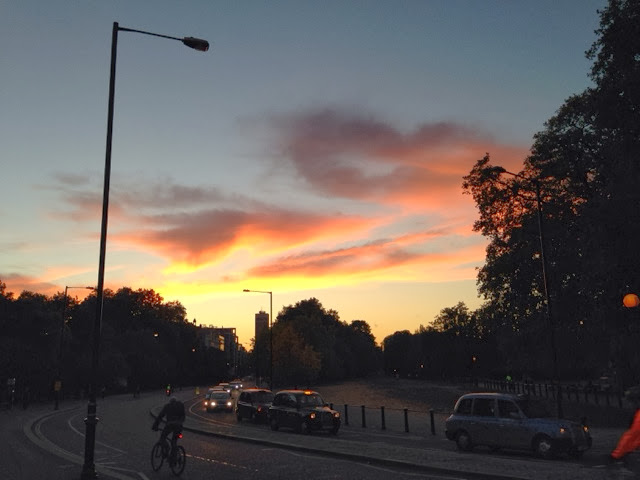 This is an inspiring view. Too bad I ended up thinking about mundane every day things rather than great thoughts of genius. 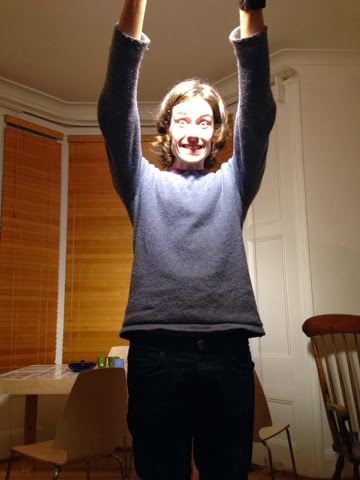 Oliver showing off his new light looking like a mad man. maybe that’s what 3 days in bed do to you. 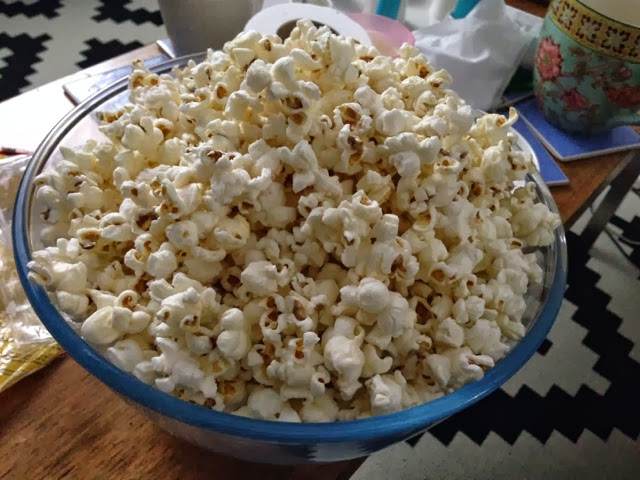 I made him a bowl of perfect popcorn. After making every one feel better on their hang over (since  mine is ALWAYS so much worse) this is my second super power. I always make perfect popcorn and i don’t cheat with a micro wave. The hung over popcorn hero. Thats me.

Made a tasty Pho yesterday. Any of you looking for a simple yet super tasty dinner should give it a go. Best with the recipe is that the meat actually just cooked by the hot soup and became perfectly tender even if I just used simple meat medallions.

Here is the recipe

Other than that didnt do much yesterday. Ol is sick so we watched Homleand and laughed at some pics from Saturday.

Why not? Apparently 10 years dont make much difference to your dinner table behavior.

I have no idea what is happening here but im sure its late enough to not have to care.

Letters to my family
Blog at WordPress.com.
Loading Comments...